How to use PGP key

There are 3 main things; PGP owned by a company, OpenPGP, and GPG. Functionally, they behave nearly identical from my understanding. I'll use the term PGP in this post.

It is super easy to use. I'll start with what PGP is or does not:

So, it does NOT do those things. What does it do? It allows for the encryption of text/files. These instructions should work universally.

One might get prompted to create a key-pair right off the bat, which is fine; however, if one is a freedom fighter, on the run from a global government or something 👽, one should ponder if they should put their real information.

"Oh no! How do I get my public key?" Generally speaking, there is an export option somewhere. Don't export the secret key. Make sure the export file begins and ends with 'PUBLIC KEY'. Make sure a key-pair has been created first though.

If one desires, one can send a 'test' message to me. Be sure to include: Your public key so I can send you a message back. I will assume your perferred email address is the one on the public key unless you tell me otherwise.

[1]Keys you get can be... not who you think it is. One ought to verify the truthfulness of where one gets a key. Any key from the internet CAN be the NSA pretending to be somebody. Further reading on this topic maybe needed for those that are security/privacy orientated.
[2]Or put the file on a flash drive and give the flash drive to the recipiant. Email is not a requirement.
Link-Permalink

Installing an OS with UEFI

The end result is a working Manjaro at least. Two of them in fact! One installed on a /dev/sdb and another on a /dev/sdc! How?? Why? Well, I shall tell the tale.

Anyone who has Windows 10 installed on a 'clean' storage device and attempts duel-boot with a linux OS will know that they are going to have a bad time. Espeically if they had Windows installed with U/EFI, which is what I had. I attempted to install Manjaro with GRUB on a EFI...

Hmm... I am willing to admit that I am not a big Linux nerd, so it makes sense that I am not a big GRUB nerd either; I knew of UEFI/EFI due to past experiences when trying to install Manjaro on a different computer. How do I put this... Lenovo really could have done a better job with the UEFI menu. When you deleted the 'secure keys' you had to boot into Win10 and then shutdown and start the laptop with that Lenovo button and then MAKE SURE YOU BOOT INTO THE MENU AND NOT SOMETHING ELSE BECAUSE IF YOU MISS CLICK, WHICH WAS VERY EASY TO DO, YOU HAVE TO RESTART THE WHOLE THING AGAIN BECAUSE LENOVO DIDNT THINK TO PUT A 'BACK' OPTION and then disable the 'secure boot' and then boot into Win10 again so the settings could save (deleting the keys leaves the 'secure boot' toggle greyed out without booting into Win10 first for some reason) and then you can boot from a non-windows install on the laptop! 😠

I was this close

This is my experience with UEFI the first time I encountered it. Lets just say it took 'a while' to figure out that you need to boot into Win10 to have that secure boot option toggleable. Also, I don't know why but they put a 32bit bootchip thing on a 64bit laptop... Most (every single one I tried) distros had 64bit boot-thing paired with 64bit OS... not 32bit boot-thing paired with 64bit OS which was a 'fun' puzzle to solve. I actually never would have solved that puzzle without the Manjaro community. Without the Manjaro community that laptop would have been still using Win10. The Ideapad 100s... Lenovo really did a number on me. They also cemented permanate negative feelings towards the characters 'UEFI'. Even though UEFI is technically better than BIOS (or so I've read), I still harbor residual rage. Next time I buy a laptop it won't be from Lenovo and it will not have UEFI.

I had a better experience with this attempt... even if it did take me like 8 hours to 'solve.' When using the install-'cd'-icon that Manjaro offers, it would always fail at the bootloader part. I could never get it to work. I wanted to just install it and be done, like in the good old days with BIOS. Well, it turns out that I was 'live-cd'-ed into 'legacy' which meant BIOS but of course I did not know this and when I went to install the OS... Well Grub always failed like I mentioned. So, I followed every single piece of instructions that I could; sudo update-grub, one that made you chroot into the installed Manjaro then updated grub but first made sure you had some tools like dosfstools, mstools, efibootmgr... I remember having to see what an efi related command did but I got a fun error message: EFI variables are not supported on this system. :) Anyway, this means that the live-CD was not booted in EFI mode. It turns out my motherboard can do both UEFI and legacy(BIOS). So, not knowing this is my fault. I go to restart my computer and didn't press the del key enough times and then grub appears. With two options for Manjaro. Yes! Exactly what I wanted! But no options for Windows... No biggie; I'll just make a GRUB entry for the window EFI bootloader and it'll be ok! Long story short, legacy GRUB does not like EFI and I am unsure if EFI Grub likes legacy and frankly I do not want to know. When I want to switch between Linux and Windows, I go to the motherboard's "UEFI BIOS" (by pressing the del key enough times) and I switch every boot option to either Legacy only or UEFI only and manually boot into the correct drive. While disgusting, it works. Technically, I did not manage to install an OS with UEFI, but clearly that was my fault for not making sure I was in EFI mode. This whole thing was too nasty for me, so I will try to stick with motherboards with only BIOS from now on even though in this case my issues were self-inflicted.

Also, there is something that people who want to duel-boot with Windows 10 should know: cmd with admin privs --> powercfg -h off This turns off the 'hibernation' mode..... meaning when you turn off your computer the OS actually shuts down- not leaving the harddrive/ssd in somekind of hibernation state. I was able to mount the hibernation drives but only as read-only. Also disable fast boot. Otherwise, from my understanding, GRUB will not pick up Win10 and you will have a lot of 'fun' puzzles to solve.

So. Most pages are changed in some way. I put in buttons. There is now a Latin blog but... 100% of the content of that blog is directly translated from English to Latin with Google Translate. I know very little Latin, but I am pretty sure Google's Latin can use some work.

I put the Latin blog posts in the same directory as the other blog posts but with the ending of '_la'. I figure that this will make it easy for me to easily find the pages that need revision. So far I have avoided bulky databases and I intend to continue to do so.

I have put a public PGP key on the My Friends page so people can email me. I will make a blog post about using PGP keys soon.

RSS support is still planned though I have not even began looking into how it will work. I assume that people subscribe to the RSS file that I host and then RSS readers will notice a difference but I am unsure. Ideally, I would find a script that produces the RSS file by itself.

I will create a 'rolling release' blog page, it shall supercede the index though the index will still be avaliable for all to see. I think I will keep the 'rr' blog page only in English until my Latin improves. In addemem, I think I will stop producing Latin blog posts, directly copying to Google translate then pasting it on the html file is truely disgusting.

I have acomplished my main goal which is a minimalistic semi-decent blog website. If I wanted to get fancy I could add a way to automate the posting on this website since the 'code' for the blog posts are literally just basic HTML. Learning about CSS was fun and I managed to get the 'footer' to auto-change when I change a thing on the CSS file.

What I will blog about... I do intend on putting a website on a domain (not nessisarly this one) so I am unsure weither I want to work 'hard' on this blog. Honestly I had the most fun creating the blog and creating a multipage blogpost (bloat) Initially I had plans to file by year/month/day/hour... etc but I decided against that and to just throw all the blog posts in one folder. They are not named in a cryptic manner so if I ever want to revise something it would be easy. I'll have to remember to add a 'edited' header after the date posted I guess.

They are aliens and they are not from Earth so I still hate them, even in this not-a-joke blogpost. 🤷‍♂️ It is what it is.

Aliens are the scum of the Earth, even though they are not from Earth!

My cat is my only ally against these non-Earth demons! Look at him!!!!! 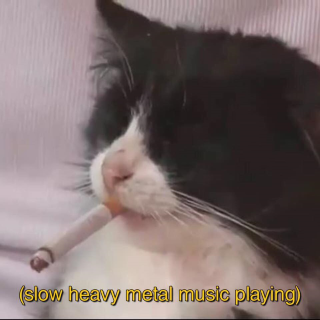 His name is Gregory